Root Cause of Cancer and Viral Diseases Revealed

Thousands of medicines and medical devices had been invented to combat many diseases worldwide. There are remarkable remedies and cure for bacterial diseases, however, treatment for those afflicted by viruses, cancer, and diseases of unknown cause, remain uncertain.

No one has truly discovered the origin of viral and incurable diseases. In other words, medical scholars failed to define the origin of viruses so they cannot stipulate the definite cure for them.

Many believe that the origin of cancer and incurable diseases is virus. They believe that viruses are responsible for the disease. But can they explain where these viruses come from?

If a virus is composed of protein and nucleic acid, what kind of force or energy is working in a particular person that creates this virus? Look at the patients suffering from leukemia or cancer due to overexposure to radiations such as X-rays and nuclear radiation. They are victims of such radiation energy that creates cancer in the body. Therefore, like virus, it is evident that cancer is just a 'byproduct' of something else.

Illnesses caused by overexposure to radiations are man-made side effects. However, a vast majority of cancer diseases and practically all viral diseases are definitely NOT man-made. Certain unknown energy like a radioactive property is penetrating the victims.

Finding the Visible and the Invisible

If we are to divide the world, there are only two parts that comprise them, the visible and the invisible. The invisible things are air, radio waves, sound, etc., yet we cannot deny their existence. We are somewhat made to believe things that can only be explained within the knowledge of scholars. Can you not believe that there are things existing beyond the knowledge of scholars?

In fact, all the mysterious maladies that plague the world today and considered incurable by modern medical technology are caused by invisible force of energy wave. And truly, this mysterious wave was known thousands of years ago.

How can we prove or analyze its presence scientifically? We'll be glad to answer it, IF you can explain how our spectacular brain system was created in the womb of our mothers. As you can see, there exist things that are beyond the knowledge of our science, and there are things that cannot be explained by science alone.

Hereafter, we are going to term this mysterious force of energy wave as the "outside negative energy force" or just simply "negative energy", which disturbs the brain system, which is the producer of VIRUS or CANCER, the denominator, the one responsible for almost all kinds of world maladies, and which its origin has been unknown to scientists for centuries.

The Outside Negative Energy Force

This negative energy is just like an invisible beam of light. This force of energy wave is very similar to any bacteria and it is practically everywhere in the air, soil, and water. Some are harmful and some are not, but its uniqueness is to appear and disappear in a split second of time, as some known elementary particles do.

This negative energy was known thousands of years ago, but wisdom of Man and civilization buried it deep beneath science.

Negative energy does not enter into the body. It attracts or surrounds the body.

When elementary particle that has electrical value, carried by the negative energy, enters into our body, the electricity flowing in the body, as well as on the surface of the skin, will be discharged or charged causing self-reaction, like nuclear fission or electrolysis. This changes the cell's chemistry and produce toxins in the body. This toxin is the product of negative energy.

The toxin, a byproduct of negative energy is called in medical science as VIRUS or CANCER. Thus, virus is not the cause of diseases but the negative energy.

In other words, as the brain controls the functions of the organs and body systems through an intricate nervous system, any interference will result in malfunction and an ailment will follow.

Disease can be caused by alien factors such as microbes, impure energy sources of food, water, air, and negative energy. Although our body has natural resistance or defense system against these foreign matters, it can malfunction when the disturbance is beyond control.

How to Know the Presence of the Outside Negative Energy

Junji Takano, the inventor of PYRO-ENERGEN electrostatic therapy machine, found a mysterious point when he was in a hospital. He discovered that most patients suffering from cancer or viral diseases have asymmetric finger length and palm and wrist creases.

What happens is when negative energy attracts our body, depending on the polarity (positive or negative) force of energy wave, either the left or right side of our body expands to as long as 1 mm or even up to 10 mm. This shows why the fingers on the left hand can be longer than the right or vice versa, or the creases are asymmetric.

Note: Some perfectly healthy individual may still show asymmetric left and right hand finger lengths. On these cases, the asymmetry is caused genetically or environmentally or a combination of both.

How to Eradicate the Negative Energy Force

Do you remember that sometimes it needs water to pump more water; money begets more money. It needs another rust (oxide) to rustproof an iron. Positive and negative attract each other and same polarity repels each other.

The theory may be similar to vaccine. Vaccine is prepared by obtaining modified toxins. The vaccine is introduced into the body to produce immunity. Thus, a negative energy can certainly repel negative energy.

Thousands of medicines, drugs, ultra-modern medical machines and its medical technology, including wisdom of quack doctors, seem to be getting too far from real therapeutic value. So far, there is no medical technology existing today that is capable in eradicating this negative energy force. 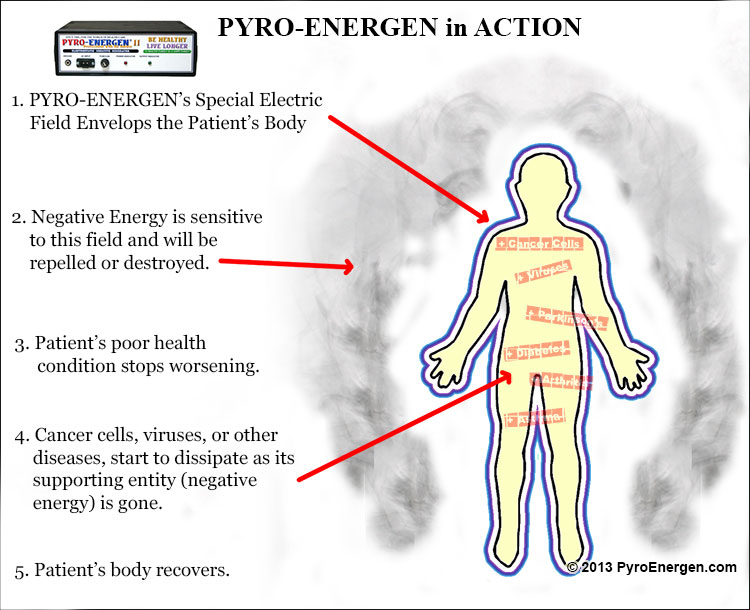 Once the cancer or virus-producing wave is discharged from your body, your health will be restored.

Homosexuality, dwarfism, etc., are all caused by the negative energy force that reassembles molecules in the human body. Yes, homosexuality can be prevented. But in this case, PYRO-ENERGEN is effective only when used during early childhood or as early before homosexuality fully manifests.

Why do sickly babies cry and usually have fever that abnormally rises at night but would disappear during daytime? Why are there patients especially those suffering from asthma who suffers more often at night?

The ionosphere, as well as the negative energy, are both waves that are electrically charged atom molecules, and their activity will be greatly influenced by other waves present depending on the time of the day.

The negative energy is especially active during nighttime due to a certain strong destructive wave from the sunlight during the daytime. This explains why many patients experience pain that gets worse at night. In fact, using the PYRO-ENERGEN machine at night even while sleeping can relieve night pain and help speeds up the treatment due to this phenomenon. The sunlight contains various waves unknown to modern science that make so many mysterious phenomena around us.

Of Course, Prevention Is Better Than Cure!

Since the time of this PYRO-ENERGEN invention, with the help of hundreds of friends who do research works in various professional fields, we have applied PYRO-ENERGEN therapy on thousands of patients in many different diseases, from a simple skin disease up to the most dreadful diseases, and from just a primary state up to the terminal stages. The results were extremely remarkable and amazing.

Although PYRO-ENERGEN can eradicate the root cause of the most dreadful diseases, such as leprosy, cancer, tumor, leukemia, and Parkinson's disease, within a matter of days, while some cases could be within a matter of hours, it does not mean that all of these regardless of age and state can be cured completely. Achieving total eradication or recovery will depend on the harmonious condition of the patient's physical body and mental attitude.

It is also worth noting that once the cancer or virus have destroyed or severely hindered your immune systems to the point where your body just cannot fight anymore, the healing time might take very long or you won't yield satisfactory results at all, even though the virus-producing wave will be removed. Sometimes, it is already too late.

It is wise to prevent cancer and other dreadful diseases. We hear so much about the need for finding diseases early. It is true that the sooner you treat cancer and other diseases the better your chances of recovery. But prevention is still superior to all. With the use of PYRO-ENERGEN, you get the best of both worlds!