Reading this article may give you more insight on the PYRO-ENERGEN technology I found more than 40 years ago.

Also read our literature "Root Cause of Cancer and Viral Diseases Revealed" to know more about the Negative Energy.

When I was a student, I thought that some senses are responsible for spread of diseases so I tried to study more about sense.

People have 5 senses. But some people claim that humans have 6 senses: sight, smell, taste, touch, hearing, and intuition. I came to think that the sixth sense is just a crazy imagination of psychics. I can agree with 5 senses but not 6.

From my study, I came to realize that the different dimensions of the world play a vital role in our living. I came to understand about the 4th dimension, which is recognized by scientists as the dimension of time. However, there is another dimension that exists—the 5th dimension.

What is the Fifth Dimension?

In physics, fifth dimension is defined as a hypothetical extra dimension beyond the usual three spatial and one-time dimensions. Back then, I was too young to prove the existence of fifth dimension.

Three dimensions, as most people understand, are width, height, and depth. The fourth dimension is time, which is characterized by three-dimensional objects moving through time.

Many scientists have thought for years that another dimension, the fifth dimension, exists beyond our perception but assumed they were so far out of reach that further investigation would be pointless.

Now I understand that many diseases are probably caused by the 5th dimensional object, which I refer to as the negative energy force. Physicists are trying to come up with ways in gathering evidence to back up or disprove the extra dimensional theories that are currently in vogue.

Physicists are probing the fifth dimension, and I can prove realms exist beyond our plane or brane. 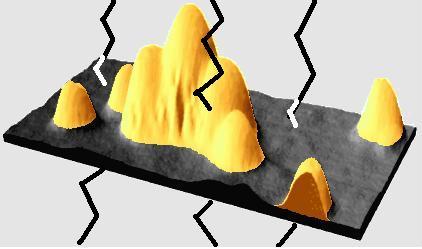 From the above photo, imagine the black plate as the earth's crust where mountains, buildings and people reside. They are all 3 dimensional objects. They move with time, so we call it 4th dimension.

Now, scientists believe and recognize 5th dimension, which is an invisible force penetrating and intruding the earth. This is the negative energy field I discovered more than 40 years ago.

The Fifth Dimension in Cosmology

However, for scientists, proving the claim that the cosmos has more than four dimensions will only bring them a collection of mysteries, such as cosmic inflation and gravitational waves, ultra-powerful gamma-ray bursts, and super-high-energy particle collisions.

For decades, physicists are baffled over the weakness of gravity compared with other fundamental forces of nature. Some scientists have speculated that the graviton, a particle thought to carry gravitational energy, may "leak" or slip into the fifth or even higher dimensions. This would explain how gravity is considerably weaker than other fundamental forces.

The animated image shows a collision between two subatomic particles residing in our three-dimensional universe. The collision produces other particles, including a graviton that escapes from this 3D space into the fifth-dimensional space. Image courtesy of Fermilab

By reading this article, you'll probably understand that the assumption that the negative energy force resides in this fifth dimension makes sense. Unfortunately, we cannot see the 5th dimension. However, there's no doubt it exists here in our planet.

If you can be in 5th dimension, and if you see our planet from there, the earth will look like a see-through planet. It is the reason no one in the world was able to trace the existence of it until recently when an American scientist revealed it with complete formulation. 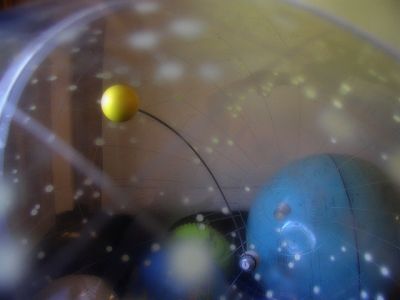 However, I knew its existence more than 40 years ago. I just could not formulate it scientifically. Of course 5th dimension is not as simple as what I have described or illustrated here. It is just a part of 5th dimension. It has many more characteristics such as shape, polarity, color, frequency, space, weight, size, and speed.

I am very glad that scientists now believe and recognize and do not deny the existence of 5th dimension. Now, I can tell to the world that the outside negative energy force can be found within the fifth dimensional space. It is the very ROOT CAUSE of many strange and infectious diseases like cancer and viruses, as well as miracles and strange phenomena.

Yes, you might be able to find 6 to 11 dimensions in the future, too.